Everything there is to know about lab-grown diamonds and the answer to your question – are they the real deal?

Many people want to know: Are lab-grown diamonds considered real diamonds? It makes sense to question the authenticity of lab grown diamonds. After all, how is a long-treasured and rare creation of nature now simply being developed by humans in a lab? It would seem like the value wouldn’t be the same.

Let’s take a closer look at lab grown diamonds and their significance in the history of diamonds.

When did our love affair with the diamond begin?

While there are textual references to diamonds from as far back as 3000 years ago, the first known example of diamonds being used in ornamentation or jewelry was in a Hungarian royal crown from the year 1074. From that point on it became more and more common to see royalty embrace the diamond as a prize possession and feature it on their jewelry.

As the popularity of diamonds grew, techniques developed to cut and shape them to enhance their beauty and sparkle. Diamond cutting began in the 15th Century in Paris, and the traditional faceted shapes and forms of diamonds that grace us to this day began to emerge.

Put a ring on it

De Beers famously launched the “A Diamond is Forever” marketing campaign in 1947, reigniting the obsession with diamonds and bringing the trend through to the modern era. Marylin Monroe gave a voice to diamonds when she sang “Diamonds are a Girl’s Best Friend” in the 1953 Hollywood hit Gentlemen Prefer Blondes.

Brands like Tiffany & Co. have made their fortunes through the popularization of the diamond engagement ring. The first “Tiffany Setting” diamond ring premiered in 1886 and featured a method of stone setting that has become the standard prong setting we are so familiar with to this day. It pulled the stone from the bezel setting that had been used primarily until then and elevated it in a prong setting that allowed more shimmer and sparkle. This setting method also highlights the size of a diamond as there is no bezel obscuring the stone.

You may hear lab grown diamonds referred to as a synthetic diamond. This is a misleading term because there is no distinguishable difference between lab grown and natural diamonds. The term synthetic tends to imply that the quality is subpar or fake, which is not the case here.

Are there “Fake” diamonds?

Cubic zirconia (CZ) and synthetic moissanite, both diamond-like in appearance, are at times considered “fake diamonds.”

Cubic Zirconia: Cubic Zirconia is created in a lab with a mixture of high purity zirconium oxide powders and stabilized with magnesium and calcium to create a colorless (though color can be added,) high sparkle stone. Cubic Zirconia has actually been found in naturally occurring deposits but it is exceedingly rare to find naturally and essentially none of the cubic zirconia sold in stores is naturally formed. Cubic Zirconia takes several hours to several days to grow in a lab.

Moissanite: Another stone that is almost exclusively man made and rarely found in a naturally occurring state, Moissanite is more commonly referred to as a “fake diamond” or “diamond alternative”. While it’s true that the gemstone does naturally occur, it has only been discovered on meteorites and therefore cannot be reliably mined. Moissanite is made in a lab using Silicon carbide powder and a heating process to create the right conditions to form the crystals over a several-month period.

Cubic Zirconia is less expensive than Moissanite due to its quality (it scratches more easily and doesn’t last as long and takes less time to make) and Moissanite is cut and graded more similarly to Diamonds.

In the end, they both have largely different chemical and physical properties that are quite apparent to the trained eye, and therefore are easily distinguished by a trained gemologist. In comparison, lab grown diamonds are not nearly as simple to differentiate from naturally occurring diamonds. 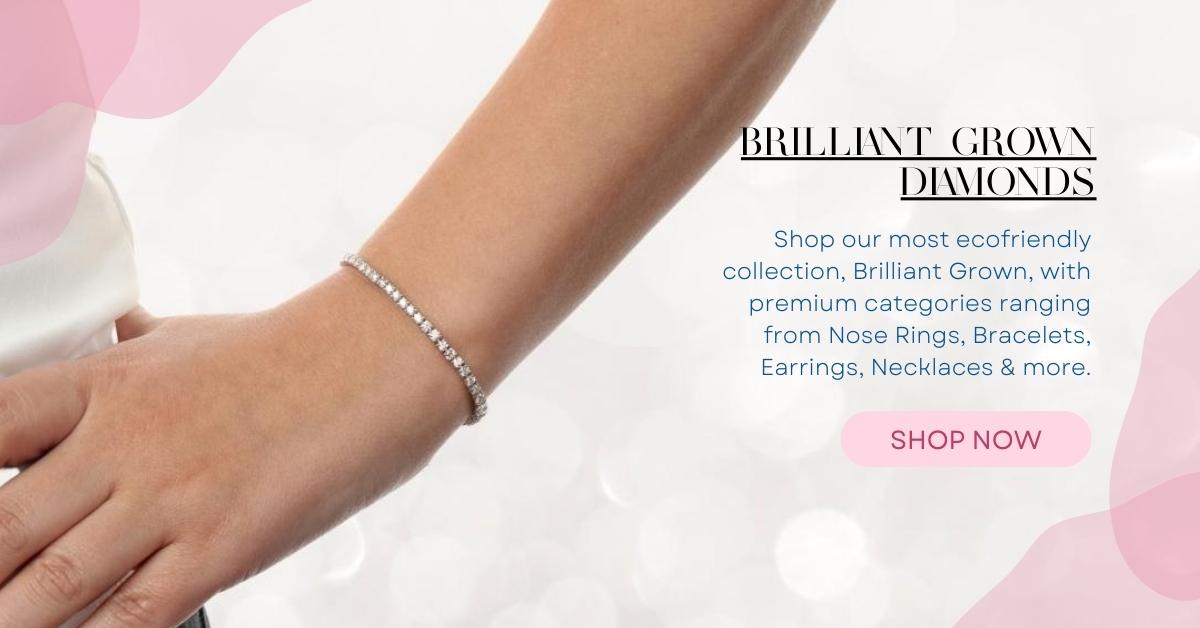 The first lab grown diamonds were created in the 1950’s. Most think of diamonds as the focal point of beautiful jewelry, but in fact there are a significant number of industrial applications for diamonds where the ability to mass produce proves extremely handy.

Scientists had been aware since the late 16th century that diamonds consisted of pure carbon. Since then, there have been several failed attempts to create a man-made diamond. It wasn’t till 1954 that scientists were able to use a high pressure belt press, heat, and graphite in a mixture of other metals to shift graphite into diamond.

Although these first diamonds weren’t suitable for jewelry, they were more than perfect for industrial uses. It wasn’t until the 1980s that scientists could offer their lab grown diamonds as competition for naturally grown diamonds.

How are lab grown diamonds made?

Chemical Vapor Deposition: The CVD method of diamond creation begins with a very tiny diamond of very high quality. The diamond is placed into a chamber within a vacuum plasma reactor which is filled with carbon-heavy gasses and heated until the point at which the carbon bonds break and the atoms fall onto the diamond plates. The carbon atoms which are emitted by this process build and layer in the form of a tetrahedral structure, creating a rough diamond.

High Pressure, High Temperature: The HPHT method of diamond creation replicates the extreme pressure and heat found deep within the earth and transforms highly refined graphite into liquid carbon. The cell containing this carbon is slowly cooled over a several day process that allows the carbon atoms to create that tetrahedral structure and form a diamond.

Interestingly, the HPHT method of diamond creation can also be used to brighten, color, and clarify naturally occurring diamonds. Manufacturers can even create highly desirable diamond colors such as pink, blue, and canary yellow using this method. Sometimes CVD diamonds are run through the HPHT process after their creation for this very reason.

Are there any notable differences between natural and lab grown diamonds?

Natural and lab grown diamonds maintain identical physical, structural, and optical qualities. This means that no, there is no notable difference between the diamonds made in a laboratory and in the earth besides how it came to be (and how long it took to create – billions of years versus a matter of weeks!)

It is not to say that there isn’t something special about a gem that has spent an unimaginable amount of time slowly forming in the ground. Part of what has always drawn the fascination of humans to diamonds is the glittering stone emerging from the ground. But the benefits of lab grown diamonds are rapidly becoming apparent to the consumer.

What are some of the benefits of lab grown diamonds?

The diamond industry has been notorious for their poor labor and ethical standards. The industry can’t choose where diamonds happen to be found, they have initiated a collective oversight governance called the Kimberley Process to help eliminate conflict diamonds. Although it has been somewhat successful, there is still a notable problem of conflict diamonds being sold widely on the market.

Lab grown diamonds, on the other hand, are definitively conflict free as they need not be mined or created in areas of conflict. Unlike massive mining projects, essential resources aren’t disturbed and countless gallons of water are not wasted. The lab technicians who create the diamonds are safe in their workplaces; they are not subject to the dangerous working conditions of mining and moving earth.

Should there be any doubt, lab grown diamonds are easily traceable because of the controlled environments in which they are grown.

Lab grown diamonds are shielded from natural elements and undesirable environmental changes and are therefore some of the highest quality diamonds available. A large majority of lab grown diamonds are rated at IIA, which is the purest form of diamond with no nitrogen or boron impurities. Only occurring in two percent of naturally occurring diamonds, it is safe to say that the quality of diamonds crafted in a lab is far superior overall to their counterparts mined from the earth.

Lab-grown diamonds can change the industry

It’s hard to argue that diamonds have fallen out of style or that women from all over the world do not covet a beautiful, sparkly diamond of their own. However, many other options have emerged, and the one moment that has belonged to the diamond for generations – engagement – is beginning to welcome some alternatives as well.

Millennials and subsequently Gen Z have famously turned away from diamonds for engagement rings. Although there are many factors at play, the ethical and environmental considerations of diamond mining are among some of the primary reasons for newer generations choosing diamond alternatives.

It is certainly possible that access to and education about lab-grown diamonds change the future of the diamond industry.

Diamonds created in a lab have minimal, almost indistinguishable differences from naturally occurring or “mined” diamonds. Diamond companies have been working to perfect the art of diamond creation and remove the stigma of a lab grown diamond. We have always seen gemstones as something of a treasure from the depths of the earth; the rarer the find the more it is treasured.

Despite their significant improvements to the ethical and environmental impacts of diamonds, it remains to be seen whether the general population can be convinced that lab grown stones are as precious as mined.

A simple rebranding to “cultured diamonds,” “artisan made diamonds,” or even “cultivated diamonds” could present a more appealing option to those who find themselves interested in the concept but turned off by the idea of the precious gemstones in their jewelry being created in a laboratory. After all, it was the branding of diamonds as such a precious commodity that made them such an object of desire in the first place.